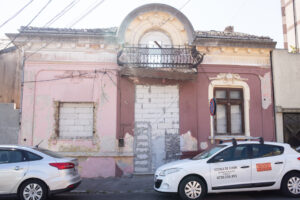 A building with historical and memorial value, the house of the rich Greek man Demostene Tranulis, on Olteniei Street, no. 27, is gone. The building was completely demolished by the new owners.

Even though the authorities specifically instructed that the facade on the street side and the Art Nouveau decorations must be kept, these were broken to the ground by the machinery during the construction works. Another immobile is being built on the spot of Tranulis House.

The local authorities prepared the paper work for a criminal complaint, and the County Directorate of Culture hopes that the owners will rebuild the facade and the decoration in accordance with the originals. (details here)

The immobile inhabited by Demostene Tranulis was a spacious house, imposing, with very much good taste, built in the Art Nouveau architectonic style. Before being demolished, the semicircular detail, uniquely decorated, above the entrance. where the year of construction was also encased (1914), together with the owner’s initials, and the decorations on one of the windows, with rich wreaths above it and framing on both sides were maintained. The entrance, the walls of the rooms, the monumental inside stepcase, the hardware were not preserved, nor were the facade and inside decorations.

Demostene Tranulis (born on the 22nd of march 1883), an important Greek cereal merchant, integrally financed the building of the hall of the current State Theater of Constanța, on Ferdinand Boulevard, in 1927, and he contributed to the building of the Mircea cel Bătrân High School (currently a National College) and of the Sfinții Arhangheli Mihail și Gavril Church (Military Chapel). Demostene Tranulis projected the first movie in Constanța, in the year 1900, and is the the author of the first documentary about Constanța, made in the Summer of the year 1925. He passed away on the 24th of July 1946 and in his memory, on the facade of the State Theater, was placed a reverential plate, as well as a bust on the inside.

A step taken towards the rehabilitation of the old Bulevard Hotel